Thailand is ready to host the Harmony World Puppet Carnival in Bangkok Thailand 2014 during November 1-10 with free admission. 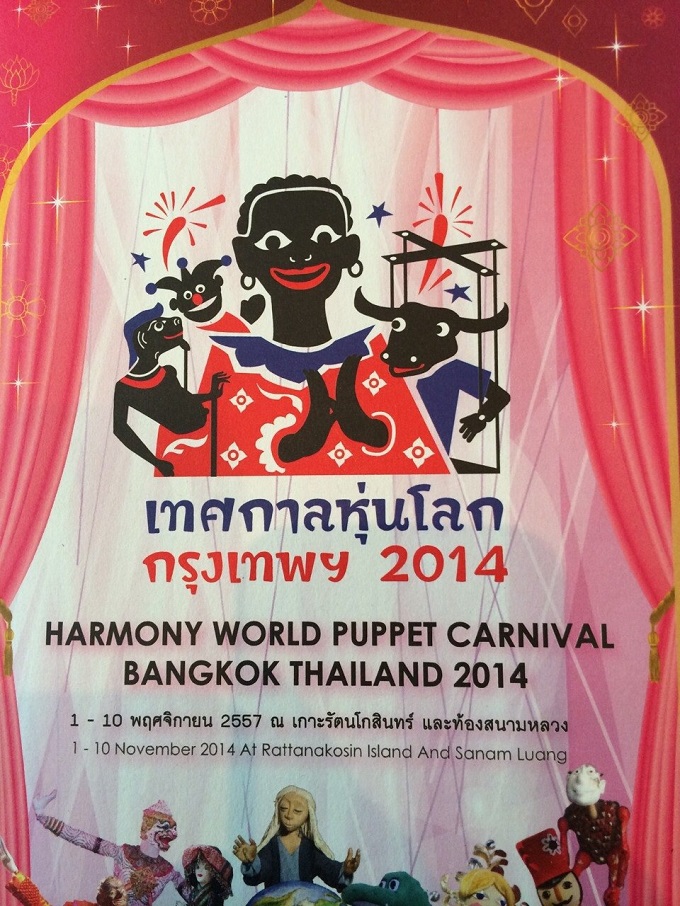 Related public and private organizations join force to welcome 166 groups of puppeteers from 80 countries around the world, the biggest festival ever. All areas of facilities have already been in place, and TCEB and TAT are certain the event will create fully-fledged confidence and impression, hence higher revenues from tourism. Also, Thai Health Promotion Foundation and Child and Youth Media Institute have established the youth puppetry network to be festival delegates as well as organized special activities for children and youths and their family. Finally, Siam Paragon will open up space for a wide variety of performances during the festival. All Thai people are invited to welcome and become good hosts to visitors to the festival.

October 14, Siam Paragon/ Mr. Weera Rojpojanarat, Minister of Culture, presides over the press conference on Thailand’s readiness to host the Harmony World Puppet Carnival in Bangkok, Thailand 2014 by the Ministry of Culture, Bangkok Metropolitan Administration (BMA), The Crown Property Bureau, TCEB - Thailand Convention and Exhibition Bureau (Public Organization), and Semathai Foundation, with cooperation and support from Tourism Authority of Thailand (TAT), Thai Health Promotion Foundation, Child and Youth Media Institute, Siam Paragon Shopping Complex, and Princess Maha Chakri Sirindhorn Anthropology Centre between November 1 - 10 of this year. There will be a total of ten theaters and performance venues around the Rattanakosin Historical Area, nearby area and Siam Paragon Shopping Complex. On each day, various performances including puppet shows, puppet movies, and puppet videos, as well as various activities, will be organized from 10:00 a.m. to 09:00 p.m., with free admission. 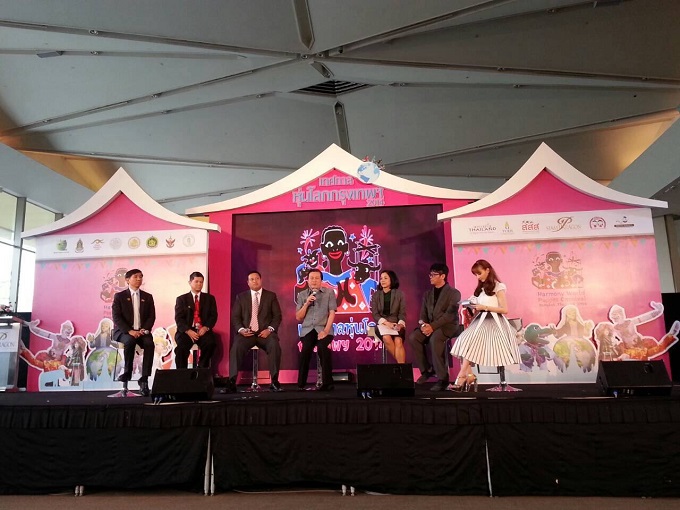 “This is considered an auspicious occasion and a pleasing situation that the World Puppet Association has granted the patent to the carnival to Thailand. During the days of the carnival, the areas around the Rattanakosin Historical City, at Princess Maha Chakri Sirindhorn Anthropology Centre, and at Siam Paragon will be filled with vibrant colors of different types of puppeteer arts. There will be cultural exchange, as well as performances that will definitely be admired by both Thai and foreign visitors to the event. This helps generate happiness among the Thai people, publicizes the reputation of Thailand as a coveted tourist attraction among international tourists, and boosts conservation efforts of different types of Thai puppetry. The carnival itself is a dynamic tool for self–expression and exploration. With fanfare, performances and a parade of puppetry around the world, we celebrate Puppet Art. Carnival is a tool to unite the world; to seek out our roots, develop new ways of looking at the world and its cultures, and finally, a tool to discover and celebrate what we have in common and what makes us different. All in all, we celebrate life,” said Mr. Weera Rojpojanarat, Minister of Culture.

Professor Dr. Apinan Poshyananda, Permanent Secretary of the Ministry of Culture explains, “This year, Thailand will host the Harmony World Puppet Carnival in Bangkok 2014. We take pride in the fact that there will be as many as 116 puppeteer groups from 79 countries around the world to participate in the festival, together with 50 local puppeteer groups, totaling more than 160 puppeteer groups, the largest number ever since the year 2008 when the World Puppet Festival was first organized. There will be more than 22 puppet movies and videos to be shown all through the festival, and seminars and workshops will also be organized on the areas around the Rattanakosin Historical Area including Sanam Luang (Pramane Ground), the National Theatre, Wangna Theater, the Rajdumnern Contemporary Art Center, the National Gallery Bangkok, National Museum, King Rama III Memorial Park, Sala Charlermkrung Royal Theatre, Princess Maha Chakri Sirindhorn Anthropology Centre, and Siam Paragon Shopping Complex. On behalf of the Ministry of Culture, I would like to invite all Thai citizens to host the carnival and welcome international puppeteers, as well as attend the performances of both visiting and local puppeteer groups.”

On the evening of November 1, puppeteers from different countries and delegates from the Youth Puppet Community Thailand will join the parade from the Rajdumnern Contemporary Art Center to Sanam Luang (Pramane Ground), where the opening ceremony will be organized, with General Prayuth Chan-ocha, the Prime Minister, presiding over the ceremony. The opening ceremony of the Thai Puppetry and Contemporary Puppetry Arts in the Reign of King Rama IX Exhibition will be organized on the second day of the festival at the Rajdumnern Contemporary Art Center. As for the closing ceremony, which includes various award ceremonies, it will be hosted by the Tourism Authority of Thailand in the evening of November 10 at the National Theatre.

In terms of available facilities, Mr. Amorn Kitchawengkul, Deputy Governor of Bangkok Metropolitan Administration (BMA), the city host, explains, “Bangkok Metropolitan Administration fully supports the carnival. BMA has prepared to facilitate transportation of visitors to the event, with four streetcars to run around the areas inside and around Rattanakosin Historical Area. It is recommended that visitors to the event use public transportation to the venue before using the streetcars provided to get around, which would be the most convenient means of transportation. In addition, BMA has granted permission for the organizers to use the area at Sanam Luang and King Rama III Memorial Park for the performances, the opening ceremony and the welcoming reception party. Also, BMA has already prepared the security details, first-aid unit, cleanliness and hygiene care, transportation for performers and puppeteers, tourism activities for performers and puppeteers, public relations activities, and public relations material production. On behalf of the administrative board of Bangkok Metropolitan Administration, I would like to invite Thai people to participate in the carnival and to welcome 166 puppeteer groups from 80 countries so as to further enhance the reputation of our country—as a good host and as a country rich in invaluable cultural heritage that should be conserved for generations to come.”

Mr. Chiruit Isarangkun Na Ayuthaya, Vice President, Administration and Strategic Support, Thailand Convention and Exhibition Bureau - TCEB (Public Organization), states, “The Harmony World Puppet Carnival 2014 is considered a major success of both Thailand and TCEB, as we are the host of a world event. This is considered an auspicious opportunity for Bangkok, as a “MICE City” to present its potential and readiness to host a mega-event and to be the center of business operations, as well as to highlight the standards and personnel of the MICE Business to accommodate a mega-event. Up to the present, TCEB has provided support to the organizers of the Harmony World Puppet Carnival in Bangkok Thailand 2014 in visiting and observing the readiness of the areas in and around Rattankosin Historical City, sponsoring the event patent and organization of major conferences, seminars, roundtable and activities during the event, and collaborating with the Tourism Authority of Thailand in public relations efforts both locally and abroad. TCEB has also welcomed event participants through the TCEB MICE LANE services. More importantly, the organization of the Harmony World Puppet Carnival in Bangkok Thailand 2014 will be a major driving force that helps secure acceptance of other countries of Thailand as a capable host of a mega-event, thus restoring the image of Thailand and regaining confidence in the capacity of our country. This is considered an attempt to return happiness to the Thai people who have the opportunity to host a new kind of events on a global scale as well.”

Mr. Chattan Kunjara Na Ayudhya, Executive Director, Advertising and Public Relations Department, Tourism Authority of Thailand (TAT), states, “The Harmony World Puppet Carnival in Bangkok Thailand 2014 with 166 puppeteer groups from 80 countries participating will make the atmosphere in Bangkok more lively, with visitors, audiences, performers, accompaniers, and both Thai and foreign press. The event will also help promote tourism during the Loy Kratong Festival, which is expected to generate a very large amount of revenue, TAT has prepared special tourism programs for puppeteer groups, and we are honored as the host of the closing ceremony and the award ceremony, which is expected to leave a lasting impression on every visitor to the carnival to be shared to a great extent.”

Mrs. Mayuree Chaipromprasith, Chief Marketing Officer of Siam Paragon, states “Siam Paragon, as a World Class Shopping Destination, is ready to be the center of the pride of the Thai citizens to portray the valuable arts of puppetry of various countries. We are conveniently located in the heart of Bangkok Metropolis, which is considered a key strategic point of the country, hence attractiveness to draw both Thai and foreign visitors to the festival. Part of the puppet performances will be on stage for our customers and the general public between November 3 - 9 at Fashion Gallery on the first floor of Siam Paragon Shopping Complex, with free admission. This is one of the projects of the government sector that receive full support from us, so as to instill in the Thai people knowledge, understanding, and awareness of the values of the Thai arts and cultures so that they will take part in the conservation efforts to pass on this form of art and culture to the people in the next generations.”

As for children and youths, Dr. Krissada Ruangarreerat, CEO of the Thai Health Promotion Foundation, explains, “Puppets are a creative form of medium for children and youths. They are important for the learning process of children. Puppets can be used by children to express their thinking and their needs. Thai Health Promotion Foundation, in collaboration with Child and Youth Media Institute, supports the establishment and extension of the Thai youth puppet network under the name YOUTH PUPPET COMMUNITY THAILAND to collaboratively disseminate the Thai puppetry art and to enhance the learning process to ensure development, expansion, and dissemination among children, youths, schools, and communities, so as to preserve and carry on unique characteristics specific to each local area, hence more pride in the local cultures. During the Harmony World Puppet Carnival Bangkok 2014, the Youth Puppet Community Thailand will participate in the festival as cultural delegates to welcome and exchange knowledge with puppeteers from around the world. At the National Gallery Bangkok on Chao Fah Road, areas will be preserved for puppet shows of the Youth Puppet Community Thailand and other activities, including training sessions on puppet-making arts to exchange skills and expertise with visiting puppeteers from other countries.” 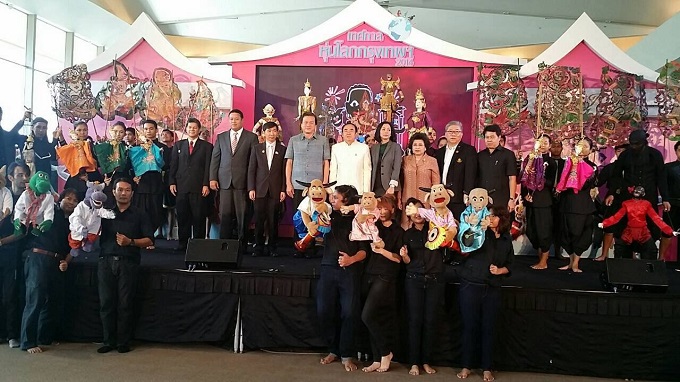