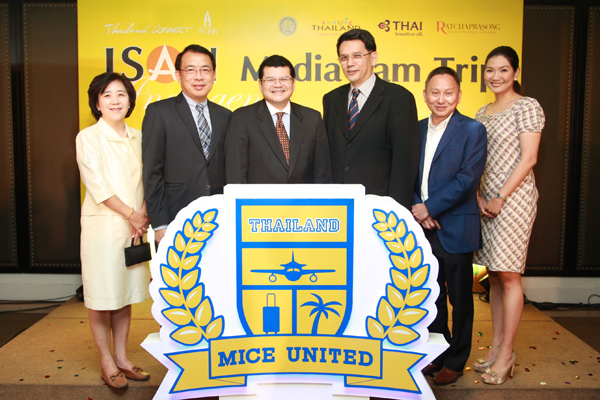 Bangkok, 8 September 2014 – The Thailand Convention and Exhibition Bureau (Public Organization) or TCEB moves forward to reaffirm Thailand’s leadership position as the world’s top MICE destination, following the smooth political transition, and businesses return to operate as normal, with the availability of state-of-the-art infrastructure, modern facilities, world-class accommodation, and perfect combination of pre- and post-tour programme. Highlighting the importance of strengthening regional economic integration, TCEB is showcasing diversity of business events destinations which include Bangkok, a quintessential Asian metropolis and the capital of connection, and Khon Kaen, a hub of economic activity and historic town in Northeast Thailand.

Mr Sek Wannamethee, Director-General, Department of Information, and Spokesperson of the Ministry of Foreign Affairs emphasized that, “The situation in Thailand is now peaceful and secure, as reflected in the satisfaction of both ordinary citizens and the business community. So now is the perfect time to showcase Thailand’s strong fundamentals and resilient economy. As key government policies are being expedited, including important infrastructure projects to enhance Thailand’s natural advantage as Southeast Asia’s logistics hub, foreign investors are attracted to opportunities in Thailand, which is a gateway to ASEAN, a market with population of more than 600 million. Thailand remains a regional hub, a vibrant, multicultural society with friendly people, a world-class tourist destination, and a strategic location for profitable businesses in ASEAN. 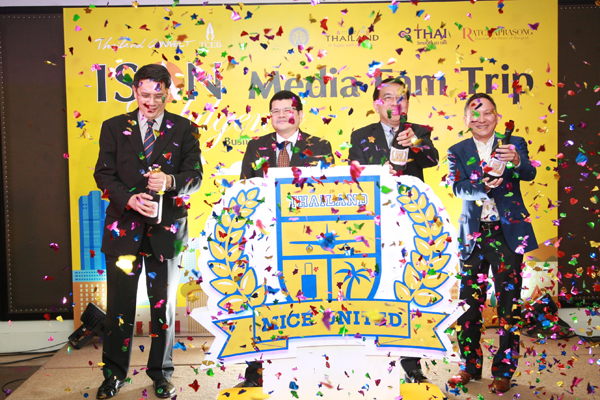 Mr Sugree Sithivanich, Deputy Governor for Marketing Communications, Tourism Authority of Thailand (TAT) said, “TAT plays an active supportive role especially in terms of promoting the positive image and readiness of MICE sector in Thailand as well as draws the potential MICE tourists into the country. Khon Kaen has emerged as a potential city to cater for the MICE venues according to its location in the heart of the Northeast region, conveniences of transportation, facilities and capability of various convention centres and hotels, attractiveness of the tourist attractions, and connectivity to neighbouring provinces and gateway to other countries.” 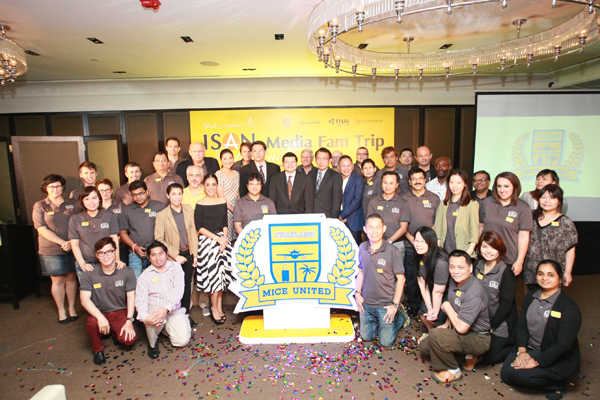 Mr Charles Pamonmontri, Director Thailand Sales Services Department, Thai Airways International Public Company Limited stated that, “Thai Airways has long realised the strategic importance of the MICE industry and has continuously supported the sector. The most important factor for driving growth in the industry lies in confidence. In developed markets, MICE businesses continue to flourish because of the confidence both entrepreneurs and buyers have in such destinations. In this way, Thai Airways can see great synergy among partners in reasserting confidence and reinvigorating Thailand’s image as a premiere MICE destination. Thai Airways is committed to leveraging the success of the campaign by offering support with promotions, roadshows and complementary or specially-priced air tickets on routes that the airline flies.”

Mr Chai Srivikorn, President of Ratchaprasong Square Trade Association (RSTA) commented that Ratchaprasong is considered ‘The Heart of Bangkok’, combining bustling businesses, transcendent tourism and unbeatable lifestyle attractions. In addition, the district is also a centre for MICE activities, with ample venues and facilities of up to 420,000 sqm. Among these are seven luxurious hotels including the Centara Grand at CentralWorld, the Four Seasons Hotel Bangkok, The Grand Hyatt Erawan Bangkok, the InterContinental Bangkok, the Novotel Bangkok Platinum Pratunam, the Renaissance Bangkok Ratchaprasong Hotel, and the St Regis Bangkok, equipped with a combined total of 3,648 luxurious appointed rooms. Ratchaprasong is also known for its unbeatable lifestyle offers ranging from high-end to wholesale, Thai brands to international labels, and from restaurants to relaxing spas, catered especially for discerning businesspeople and travellers alike.

Demonstrating the key strength of the bustling Thailand’s MICE industry, which includes diversity of destinations, unrivalled business opportunities and high quality professionals and industry standards, the Thailand CONNECT - ISAN Indulgence Media Familiarisation Trip programme is heralding the abundance of MICE offerings dedicated to the success of business events of any types and scales. The ISAN Indulgence programme highlights new and upcoming developments across Bangkok and Khon Kaen MICE Cities, with a focus on the four key pillars of accommodation, infrastructure, venues and attractions.

As the quintessential Asian metropolis, Bangkok’s new offerings have earned it the title of the top destination in the Asian-Pacific region, according to the MasterCard Index of Global Destination Cities, complementing its win of the ‘World's Best City Award 2013’ organised by Travel and Leisure magazine for the fourth consecutive year.

From international chains to home-grown boutique brands, fresh new accommodation abounds, with new hotel openings in 2013-2014 focused in the Ploenchit/Sukhumvit, Silom/Sathorn and Chao Phraya Riverside districts. The city’s modern and efficient transport links are also being enhanced, with new routes totalling 508 kilometres being progressively completed by 2029. In terms of venues, Bangkok boasts five world-class convention and exhibition centres. These are soon to be complemented by BITEC’s US$200 million expansion, US$100 million of which will be used to construct an exhibition, convention and concert hall, which will become one of the largest in the country by 2016. New and proposed attractions include luxury shopping malls such as the recently opened Central Embassy and soon-to-be-constructed District-Em and Bangkok Mall, as well as entertainment hubs including ICONSIAM, and an expanded Asiatique the Riverfront.

As one of Thailand’s premiere MICE locations and newly appointed MICE City, Khon Kaen is at the heart of meetings and seminars in the north-eastern Thailand. Fast-tracked by the strong government and provincial promotion and advancement as not only a regional MICE hub, but a global one, Khon Kaen is currently undertaking the development strategies in three phases; Phase 1 (2013): Accelerate the expansion of domestic MICE Industry; Phase 2 (2014-2015): Improve Khon Kaen MICE standards to prepare for ASEAN Economic Community (AEC); Phase 3 (2016): Explore further MICE market in pan-AEC region and accelerate the potential to support the East-West Economic Corridor.

With ongoing MICE promotion activities, such as the Thailand CONNECT Media familiarisation Trip, TCEB expects the total number of MICE travellers to Thailand this year will reach 888,210, earning to the Thai economy approximately US$2.90 billion.