Bangkok, May 7, 2014 – The Bangkok International Auto Salon 2014, the largest custom car and accessories show in ASEAN, enters its third successful year with the “Passion for Performance” theme.

Apart from the latest custom cars and tuning technology sent directly from Japan, visitors also get to check out customized models from major automobile producers. Also on display are customized cars from Thai mechanics while roadshows in MICE Cities are also planned in order to help raise awareness and develop Thailand’s potential as the center of automobile production in ASEAN.

The Bangkok International Auto Salon 2014, which is supported by the Thailand Convention and Exhibition Bureau (TCEB), also promises lots of fun for all through its “entertainment car show” concept on June 19-29 at Challenger Hall 2-3, IMPACT Muangthong Thani.

“The Bangkok International Auto Salon 2014 has been accepted as the largest custom car and accessory show in the ASEAN region. We would like to thank TCEB for its continuous support since the first show was held in 2012, as well for valuable advice throughout the years,” Mr. Wiluck Lohthong, Bangkok International Auto Salon 2014 Chairman of the Organizing Committee, said.

Leading tuners and accessory companies from Thailand as well as Japan, China, Taiwan and Malaysia will exhibit over 1,000 items. Meanwhile, activities preceding and during the show will be expanded to cover a larger number of target groups.

“This year we will bring in a wider array of custom cars from Japan, which comprises mostly prize winners from the Tokyo Auto Salon held earlier this year. This is intended to create excitement for custom car lovers in Thailand,” he said.

Many of the participants are also using the Bangkok International Auto Salon 2014 as venue for new product launches. Honda will introduce its new 2014 Jazz model to the public at the show, while PP Superwheels will launch its latest alloy wheel collection.

Lubrication specialist Motul will launch the “Techma” diesel engine oil. Meanwhile, N Sport will introduce the new Volks Racing TE 37 Ultra and ZE 40 Ultra and Unicar Motorsport will pull the wraps off the D2 Racing Sport wheel for the first time in Thailand.

In order to promote participation of customized cars and to expand Thai customer groups, a pre-event “Roadshow to MICE Cities” featuring the outstanding Toyota 86 KUHL Racing Aero Kit Ver.1 HG Grade and the world’s only 19-inch forged wheel set from WORK. Another highlight is the Mazda RX-7 customized by KRC under the “First Impact” concept featuring aggressive styling and fire-breathing engine performance.

The event will be held prior to Bangkok International Auto Salon 2014 in Bangkok on May 10, Chiang Mai on May 24 and Khon Kaen on June 1.

“The roadshow will help build up awareness for the Bangkok International Auto Salon 2014 as well as attract car clubs in the provinces to take part in our custom car contest. It will also help stimulate the regional automobile industry, preparing Thailand for its role as the center of automotive industry in ASEAN as well as for the entry into the AEC (Asean Economic Community). 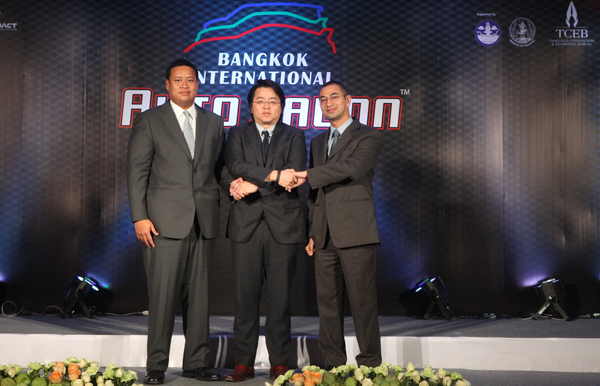 “The international exhibition industry is an important gear in driving the country’s industrial sector, which in turn helps create economic value both centrally and regionally. In order to create growth at the international level, we have also been supporting overseas marketing activities in order to create the confidence for international businessmen and entrepreneurs. This year TCEB has also urged the organizer to stage a provincial roadshow in Thailand especially in ‘MICE cities’ such as Chiang Mai and Khon Kaen. This not only helps broaden the customer base for the show but also helps stimulate awareness and growth in the provincial automotive industry,” he added.

“It will help promote Thailand as a center for custom car and auto accessory exhibition center of the ASEAN region, ready for the AEC that will be in effect in the near future,” Mr. Chiruit said.

In addition, Bangkok International Auto Salon 2014 also promises a large number of exciting shows and activities with more than 1,000 cars to participate in various car club events. Being the only event in the region to take on the “entertainment car show” theme, visitors will be amused by the ninja show from Japan, A-Class Girl Japan who will challenge Thailand’s hottest ladies, sexy car wash show by FHM Girls Next Door, photography contest, sexy car wash contest as well as concerts by famous artists.

The Bangkok International Auto Salon 2014, featuring show area of 40,000sqm, will be held from June 19-29 at Challenger 2-3, IMPACT Muangthong Thani.

Media registration can be made at www.bangkokinternationalautosalon.com/press_registration.php

About the Bangkok International Auto Salon

Bangkok International Auto Salon is ASEAN’s biggest and most exciting custom car show held for the third consecutive year, providing unparalleled access to the high-quality automotive after-market parts and accessories products, as well as one-of-a-kind customized modified vehicles from top-class auto salons – up close and in one place. Thailand is the first country outside of Japan to officially stage the event with license from organizers of the Tokyo Auto Salon.

The Thailand Convention and Exhibition Bureau (TCEB) is a public agency with the duty to promote Thailand as Asia’s leading venue for organizing international meetings, incentives, conventions and exhibitions (MICE). For more information, visit www.tceb.or.th.