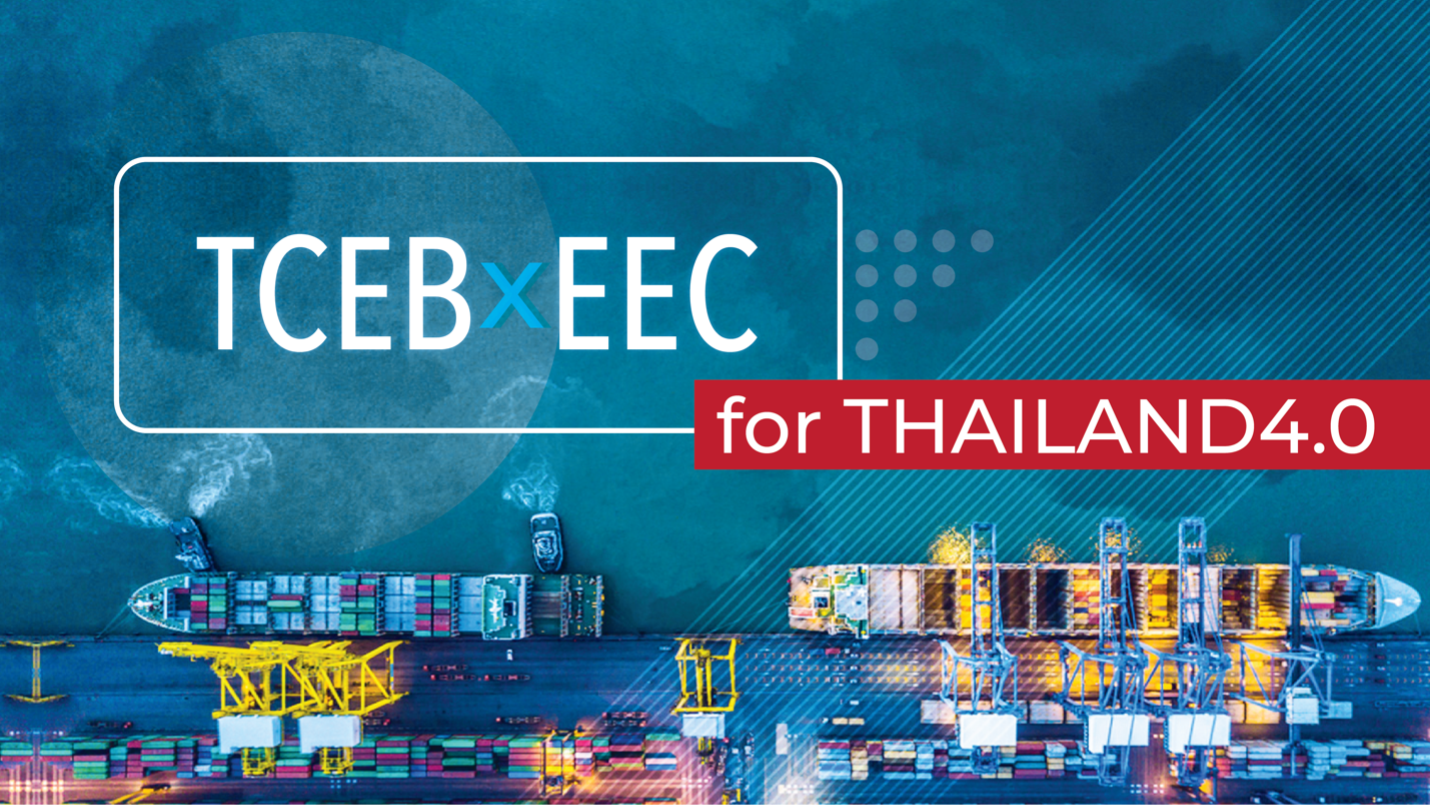 It is well known that the EEC (Eastern Economic Corridor) is a strategy to develop infrastructure systems and cities in the eastern region to level up the country's industry to grow sustainably in the long run, starting from 3 special provinces: Chonburi, Rayong and Chachoengsao. Considering to being port cities which connect to many powerful countries in Southeast Asia, these cities create an influential regional business hub with high quality utilities and logistics that have potential to develop into the international market. Accordingly, EEC is compared as a gateway of Asia welcoming more than half of the world's population, generating more than 32 percent of the world's gross domestic product (GDP), amounts to one-third, considered as the biggest investment in ASEAN.

Thailand Convention and Exhibition Bureau (Public Organization) or TCEB has played an important role in leading investors and entrepreneurs to the area through meetings, seminars, incentive travellings and exhibitions. According to the varied distinctive MICE cities, Thailand is considered as MICE travellers’ dream destination in Asia. MICE business, therefore, has a major part to generate local income and spread to the community through new innovation. It is clearly assured that both EEC and the MICE business share the same destination.

To lead the Thai economy to the international market, it should have more stable and thorough tactics, especially in the era where Disruption has been easily interrupting the economic growth if there is no backup plan. Therefore, Thai businesses should shift from a reactive to proactive strategy. To do so, it will reduce a dependency on foreign demands; instead, Thai economy can continue to expand on its own. This is a common objective that both EEC and the MICE industry are pushing forward by stimulating business matching and private investment through the construction of industrial estates, new factories and imported and trading equipment. This tactic will expand production capacity, stimulate the flow of Thai economy, and increase the country's GDP respectively.

The opening of the ASEAN market creates more competition in the same trading partner market. Thus, to accelerate the ability to compete in the world market, creating a new and more innovative industry is an crucial economic driving mechanism. For this reason, the role of EEC is required in order to strengthen Thai economy forward. Moreover, with MICE business as a catalyst, Thai economy is able to attract the potential target groups maximising value to the country at least 100 billion baht per year. MICE travellers are attracted to 10 essential different industries for exchanging knowledges and investments. According to the EEC’s focused industries, there are devided to 5 industries with potential (First S-Curves) and 5 future industries (New S-Curves) as follows: 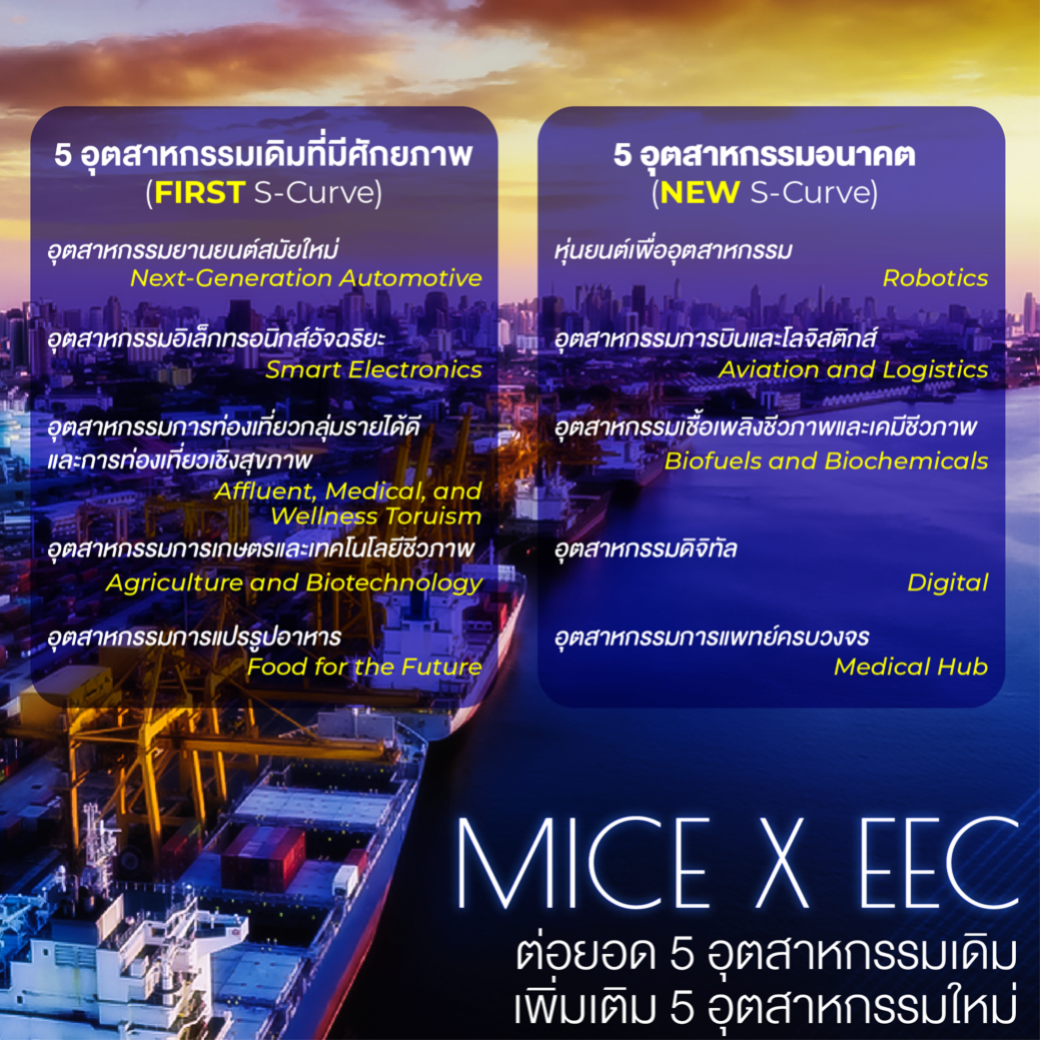 It can be seen that the 5 new industries are an comprehensive version developed from a manufacturing and asset based industry to a modern manufacturing based industry, adding values based on improving knowledge. It shifts from the Next-Generation Automotive and the Smart Electronics, the Agricultural & Biotechnology, and the Food for the Future industry to Robots, Biofuels and Biochemical respectively. Also, the new S – Curve has thoroughly divided the Affluent, Medical and Wellness Tourism to the Medical Hub, and Aviation & Logistics industries, making the 5 new industries comprehensive and able to keep up with all-round future changes. 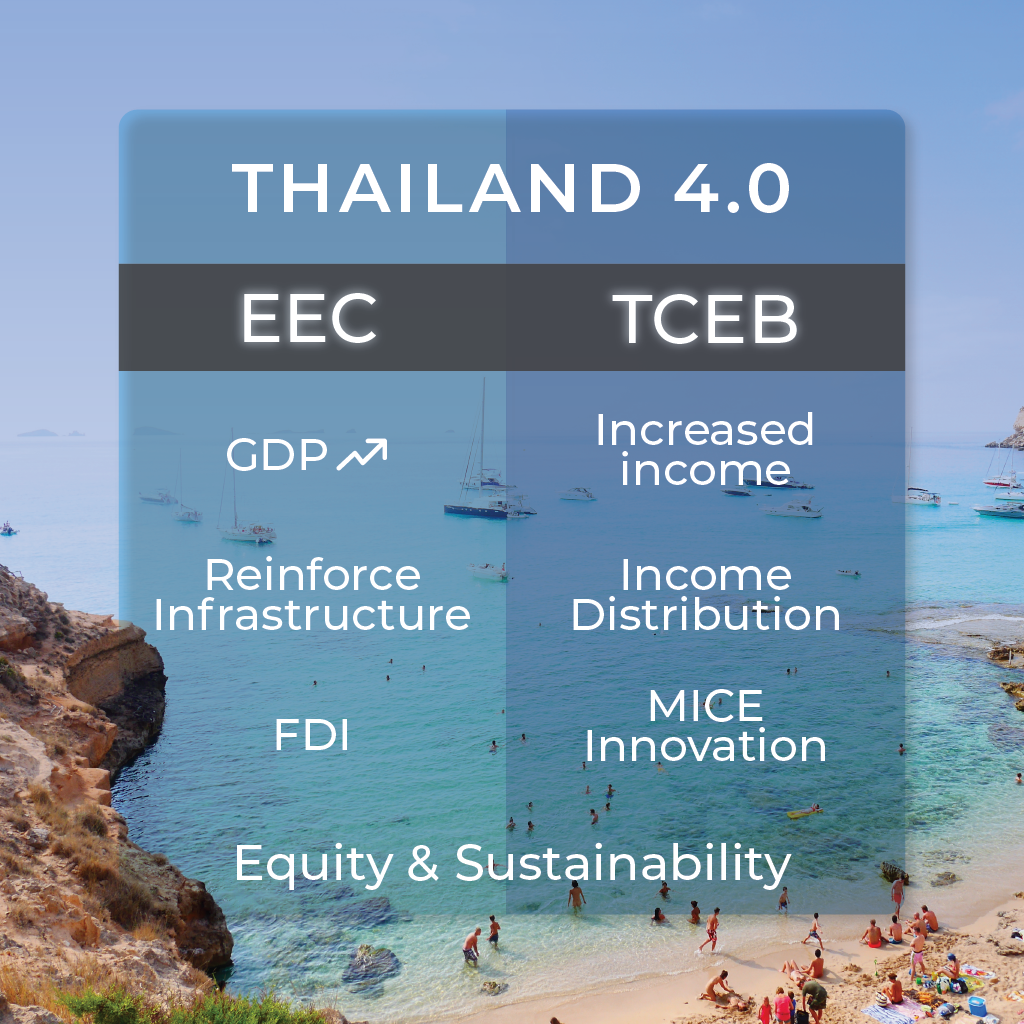 Equity & Sustainability is the core of EEC and TCEB’s operations. EEC aims to generate and distribute income to the community in a sustainable and equitable manner. The same aim is driven through the MICE industry which allows the community to participate to keep up with new innovations and eventually get Thailand out of the middle income trap to be the developed country. With the support from TCEB, the communities can be reflected, promoted and highlighted their uniqueness to the world through meetings, seminars, incentive travellings and exhibitions as follows:

It is worth keeping an eye on the biggest exhibitions from the beginning until the end of the year. Starting with "Automation Expo 2022" in Pattaya, the event reflects the intention to drive the robot industry in Thailand which is currently in great demand especially in the automotive and electronic sectors. TCEB collaborates with Green World Public Company Limited to showcase the largest automation technology and solutions in the Eastern region. Apart from that, there is another robotic event “Manufacturing Transformation Thailand” (MATRA) held at Pattaya during 29 - 30 September 2022 which is expected to drive Thai robot industry forward and grow in the future.

TCEB supports the aviation and infrastructure in the EEC through the event “Thailand International Air Show” at U-Tapao Rayong Airport, which is planned to be officiallly held in 2027 and will continue to be held every 2 years in order to maintain Thai economy to grow continuously. TCEB has a role in marketing promotion both domestically and internationally to publicize exhibitors and attendees to participate in the event. TCEB has also planned to prepare entrepreneurs’ readiness before the actual event through the "Road to Air Show" project under the event called "Aviation & LOG-IN Week". The showcase will be held conferences and other mega fairs about the aviation and logistics industry in hoping to level up the Thai aviation and logistics industry in the EEC area exponentially.

“Maintenance, Industrial Robotics and Automation” (MIRA) Pattaya during 24-26 August 2022 is another example of Thailand's impulsion towards becoming a digital hub and smart city center in ASEAN. MIRA, for the first time, is an exhibition of technology and innovation of maintenance automation, robots and solutions for the leading industrial sector in Thailand. It is the event for Thai distributors to show their potentials and expand their networks in the country.

Having clear industry objections have a major role in building trust and attracting investment from leading global companies to Thailand. To increase FDI (Foreign Direct Investment), it helps to compete with other competitors in the long run which most countries are attempting to attach with this strategy.

It can be seen that the role of TCEB in the EEC comes to support and drive the economy in the Eastern region to grow sustainably and stably. Both of them are ready to build partnerships to procure and prepare entrepreneurs to expand business networks with each other in all sectors by driving the MICE industry in the EEC area based on 4 strategies: 3Cs (Cooperation, Connection, Community Based), hilighting selling points to create events according to the city's identity, standardizing the location and the convention center to be ready at all times, and maintaining the standard of entrepreneurs, establishment and local supply chains.

[Benefits from cooperation between MICE business and EEC]

The ultimate goal of the MICE industry and EEC is to be the most up-to-dated and advanced industries in the ASEAN. The cooperation of the two business sectors, TCEB and EEC, is an influential driving force that will encourage Thailand to move forwards to complete Thailand 4.0 model. Besides, the cooperation will remarkably upgrade the Thai economy to be a high-income country or a developed country by 2032 according to the national strategic goals.