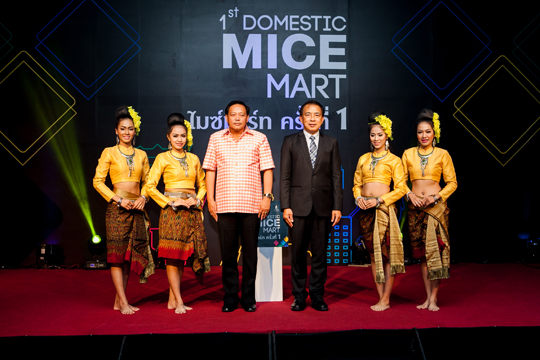 Khon Kaen : 12 June 2014 – Thailand Convention & Exhibition Bureau or TCEB, together with Khon Kaen Province, are announcing the implementation of the 4-year Provincial Development Model highlighting key strategy in enforcing Khon Kaen as a complete MICE City. Heralding the province’s very first “Domestic MICE MART”, the event is expected to ensure business matching as well as attract meetings and exhibitions for which will in turn encourage circular economy in the northeastern. 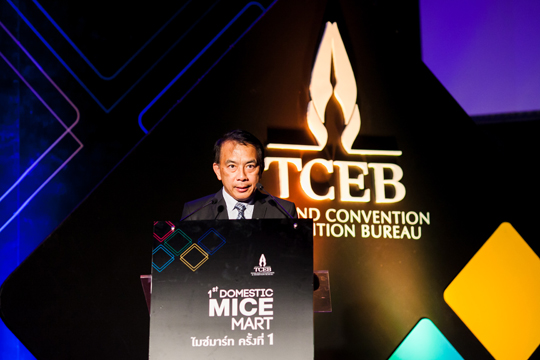 Mr. Nopparat Maythaveekulchai, president of TCEB, disclosed that, “With the economic slowdown resulting from domestic and international factors, TCEB realised the potentials of domestic MICE market and strongly believes it is a key mechanism which could encourage both regional and local economy. Khon Kaen is one among five MICE Cities that is fully equipped with transportation, MICE-related services and its role as the region’s centre. Respectively, the aforementioned readiness of Khon Kaen has brought us and the province to sign the agreement last year under the mutual goal to drive Khon Kaen’s MICE industry forward.

In this year, TCEB concentrates more on dynamic marketing and sales activities with the launch of the 1st Domestic MICE Mart in Khon Kaen.   The event was designed to allow MICE entrepreneurs to showcase their domestic MICE products and services. Notably, the event will highlight the pooling of buyers from public and private sector; state enterprise; local administration; occupational associations; private organisations, and etc., while the sellers will comprise of MICE entrepreneurs, such as convention centre, accommodation, tour agent, event organiser, restaurants and souvenir stores within the province. Both buyers and sellers will enjoy opportunities for direct business negotiation. Apart from Khon Kaen, the 1st Domestic MICE Mart will be held in other cities, such as Pattaya and Phuket.

“Khon Kaen is considered a MICE City with true readiness, especially in terms of excellent cooperation from public and private sectors located in town. These include Khon Kaen Province, City Munipical, Khon Kaen University, Chamber of Commerce, Tourism Council of Thailand, TAT Khon Kaen and Tourist Business Association Khon Kaen. All affiliates are eager to make Khon Kaen a strong MICE City for future connection with the GMS. After the agreement signing with the province was completed, TCEB has brought several events into Khon Kaen, such as the I-SAN Book Fair, Food-Restaurant & Equipment Show and the regional conference of Thai Chamber of Commerce on CLMV.  Further, the bureau also assisted in the improvement of Khon Kaen Silk Festival by adding elements necessary for international trading in the GMS for which is harmonious with the positioning of the province that serves as strategic point of the East-West Economic Corridor: EWEC. Khon Kaen will benefit from maximum use of ground transportation required for the holding of exhibitions and investment of surrounding provinces and neighbouring countries. Hence, the encouragement of MICE market will escalate service sector and advance businesses related to MICE, automatically,

Currently, TCEB is working on the development model of  Khon Kaen MICE City, branding and creating MICE selling points for Khon Kaen. In this part, the bureau has joined pact with Khon Kaen University

and the timeframe was meant to finish by September. Besides, the bureau supports the development of MICE Intelligence, or the province’s MICE database system, in order to compile information useful for the support and advancement of MICE market to serve future business competition.

Khon Kaen Governor Kamthorn Thawornsathit revealed about the direction on the betterment of Khon Kaen’s MICE industry that, “From now on, the future of Khon Kaen’s MICE will be fulfilled in harmony with the 4-year Provincial Development Model (2014-2017) implementing under the vision “Khon Kaen, The Liveable City, Soaring as ASEAN’s Metropolitan”. The movement will involve 3 main missions as follows: 1. Create strong community and happy residents; 2. Grow as a liveable city and as the model of integrated provincial administration development and 3. Support the city towards becoming the centre of GMS in terms of economic, transportation and human resources,”

“The province’s development model has mapped out the direction for rapid creation of business opportunities in 3 dimensions, including rural, urban and international. MICE industry will be key mechanism in driving the betterment of urban segment for which the concentration will be vested in assisting and facilitating business and investment, as well as reducing side effects from urban growth.”

Khon Kaen Province recently signed the agreement of cooperation with TCEB in the empowerment of MICE industry in Khon Kaen or making the province the newest MICE City. Last year, the province has assigned particular working group for the advancement of MICE. The 6 groups include meeting and exhibition team, urban development and infrastructure team, security team, tourism team, public relations team, and consultant and MICE human resources development team. Furthermore, the province also joined hands with TCEB, Tourist Business Association and hotels in Khon Kaen in representing the province as the host for global MICE events.

In the future, the province has planned to connect with key tourist destinations, including Singapore and Nanning. Successful tourism model, such as those of Singapore, will be adapted with tourism development of Khon Kaen. New tourist destinations will be added with cooperation from Khon Kaen University. For example, the Kalapapreuk Park at the Prem Tinsulanonda Camp Reservoir has been constructed with 19,999 plants grown. Other attraction sites in the province will also be revamped, while all over the city will be garnishing with the province’s signature plants, rajapruek or golden shower, in order to showcase wonderful image and beautiful landscape of the province. New and unique attractions will be created through various creative ways, too. In 2015, a photo contest to hunt for the most beautiful or largest rajapruek will be held, while smartphone application featuring the database of Khon Kaen will be launched to allow tourists and MICE travellers a convenient access to information on Khon Kaen.

“The province believes TCEB will be our advisor who helps us discover an ideal way in enforcing Khon Kaen as a complete MICE City. MICE industry is still new to us. Private sector and local entrepreneurs may lack experience in MICE marketing.” concluded Mr. Kamthorn.

The 2013’s MICE statistics of Khon Kaen remarked the number of MICE travellers at 688,000 which generated more than 600 million baht. TCEB expected that the “Domestic MICE MART” will be able to draw around 200 attendees that comprise of 100 who are buyers, private organisations, government sector, local administration and visitors from neighbouring provinces and another 100 attendees who are buyers from lodging industry, convention and northeastern MICE entrepreneurs. Business negotiations may reach 300 appointments, while successful transactions may total at 100 or equal to 16,680,000 baht in business value. Consequently, the foreseen figures will make the number of D-MICE

travellers reach the expected target at 4,502,406 or equal to 2 per cent increase. The D-MICE market value will grow to 13,291 million baht or equal to 4 per cent rise in revenue. TCEB remains strong in the betterment of D-MICE with the mission to escalate Thailand’s market position as Asia’s quality MICE market.

In the past year, Khon Kaen was appointed as the host for many large-scale conferences, such as the 2013 academic conference of the Ministry of Public Health with 4,000 attendees and The 6th International Conference on Educational Research held by the Faculty of Education, Khon Kaen University, with 800 attendees. As well, exhibitions also attracted event organisers and visitors from both Khon Kaen and nearby provinces. According to the 2013’s data, number of visitors totalled at 4,717 per day.