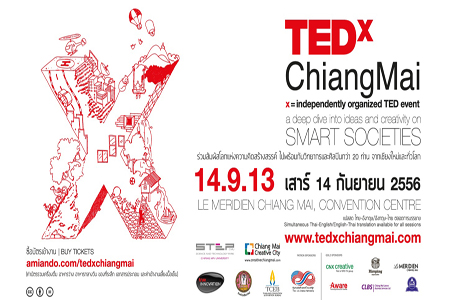 Sometimes likened to a “spa treatment for the brain and soul”, a TEDx event is a creativity and idea forum mixed with entertainment, workshops and other interactive activities to help people connect and put ideas into action. TEDx events have become a global phenomenon with events in cities such as Sydney, Singapore, Taiwan, Shanghai and Berlin, attracting hundreds, sometimes thousands, of audience members. TEDx events are independently organized TED style events under license from TED (www.ted.com).

Several of these speakers are from Chiang Mai, but a special feature of TEDxChiangMai is dedicated to the future of education and will also include 3-5 talks by school and university students from Chiang Mai - giving them an opportunity to share their ideas with local and global audience. Selected through several local auditions, the names of the students will be announced later in August.