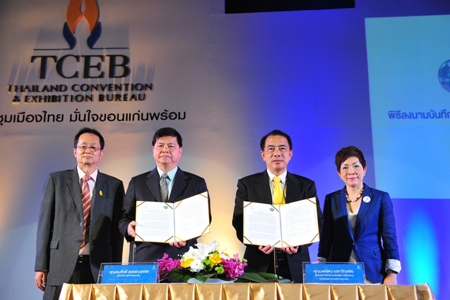 Khon Kaen/ 29 July 2013 – Thailand Convention & Exhibition Bureau (Public Organization) or TCEB recently signed a Memorandum of Understanding (MOU) with Khon Kaen to promote the province as Thailand’s fifth MICE City. Attracting participation from more than 350 government offices and local entrepreneurs to join the mission, the campaign aims to enhance Khon Kaen as the hub of international conventions and exhibitions, serving the expansion of broader ASEAN economies in the region.

Mr Somsak Suwansujarit, Governor of Khon Kaen, shared during the opening ceremony of the ‘D-MICE: Meetings in Thailand │ Khon Kaen MICE City’ and the MOU Signing Ceremony for the promotion of the MICE industry in collaboration with TCEB that, “By joining TCEB to promote Khon Kaen as a MICE City is in harmony with the 4-year Provincial Development Plan (2014-2017). Strategically, the endeavour will be implemented under the vision of ‘Khon Kaen: The livable city, moving forward to be an ASEAN metropolis’. The plan consists of three core missions: first, strong community, happy citizens; second, improvement of a livable city and the model city for integrated development and administration of the province; and third, development of a hub for the GMS (Greater Mekong Subregion) involving economy, transportation and human capital to step forward as an ASEAN metropolis.

“Khon Kaen has stipulated its strategic standpoints with a key emphasis on developing the city as an ASEAN hub for a broader range of economic services cover six facets including: Commercial, Investment and Services; Transportation and Logistics; Medical and Public Health; Educational; Conventions and Tourism; and Green Industry. The MICE industry can also serve as an effective mechanism in propelling the improvement of our provincial economy.”

With vast potential to contribute to the prosperity of the MICE industry, Khon Kaen is considered a large commercial city which is home to commerce, investment and transportation in the northeastern region. Further, the province is at the centre of industrial development in the region under the Government’s ‘East-West Economic Corridor’ (EWEC) development policy, which is designed to connect five countries, including China, Vietnam, Laos, Thailand and Myanmar. As a result of this, Khon Kaen will become the door to Indochina and Southern China – the future hub of commerce, investment and transportation in the region.

Khon Kaen is also stepping up as the hub of green industry, following the Government’s approval for the establishment of a green industrial estate in Khon Kaen to attract more investors into the province.

In addition, Khon Kaen is the northeastern regional centre of Government offices, with more than 200 state agencies, educational institutes, as well as medical and public health centres. Chosen by the Government along with Phuket and Chiang Mai, Khon Kaen is soon to be developed as a metropolis of information and communication technology (ICT).

Home to the northeastern region’s largest convention centre at Khon Kaen University that can cater for up to 3,000 visitors, Khon Kaen also has numerous five-star hotels across the province, as well as an airport that can accommodate up to 32 daily flights. Currently, the public and private sectors are joining forces to promote Khon Kaen Airport as a complete international airport in order to serve future economic expansion. 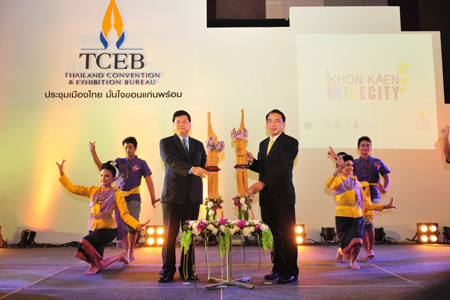 “Obviously, Khon Kaen has the potential and readiness to grow as a MICE City. The MOU signing with TCEB is a golden opportunity to create awareness of more than 350 Government agencies and local entrepreneurs. The initiation of this MOU calls for participation of relevant parties to express their commitment to promoting Khon Kaen as a MICE City and a convention and exhibition hub of the northeastern region, to serve domestic clients as well as and those from Indochina and Southern China,” concluded Mr Somsak.

Mr Nopparat Maythaveekulchai, president of Thailand Convention & Exhibition Bureau (Public Organization) or TCEB, revealed that, “Cooperation with Khon Kaen for the promotion of the MICE City is part of our holistic strategy to enhance the Domestic MICE industry. The initiative involves three obligations in the development of MICE City including: Policy and Strategy; Marketing Promotion; and Provision of Knowledge and Consultancy. Today, Khon Kaen has showcased its potential and readiness, as well as demonstrating cooperation from the public and private sectors, who are important driving forces to propel Khon Kaen towards the position of ‘5th MICE City’ or the ‘Gateway to I-san MICE City’, which supports MICE activities of on a domestic and international scale.”

The MOU for the promotion of the MICE industry between Thailand Convention & Exhibition Bureau (Public Organization) or TCEB and Khon Kaen province will be implemented under mutual collaboration in four areas, including: First, stipulation of strategy to promote and publicise the holding of MICE activities in Khon Kaen on both a domestic and international scale; second, dissemination and exchange of knowledge on the MICE industry to related public and private sector organisations in the province; third, exchange of information that enables urban planning, construction of infrastructure systems and transportation routes of Khon Kaen; and fourth, development of human resources relevant to the MICE industry to boost its potential and competitiveness.

TCEB has collaborated with Khon Kaen province in creating the roadmap for MICE development in Khon Kaen during 2013-2016 by emphasising three strategic directions including: Winning Events Strategy to maintain existing markets and expansion to target markets; Promotion Strategy to empower Khon Kaen as the region’s first option for MICE; and Development Strategy to make Khon Kaen a new MICE City with distinct uniqueness that is able to add value to the MICE industry through the creative economy.

Phase 1 (2013): Emphasis on the expansion of Domestic MICE Industry Successful domestic exhibitions will be brought to other regions with an aspiration to disseminate economic growth to several regions. Awareness of Khon Kaen MICE City and advantages of MICE City will also be created among target groups across the public and private sectors, as well as educational institutes. Additionally, events the province is already capable of handling will also be held, such as Thai Silk Fair, OTOP Fair and Mekong Forum 2013 by Mekong Institute, and many more.

Phase 2 (2014-2015): Emphasis on the improvement of Khon Kaen MICE standards to prepare for AEC In order to succeed as the hub of MICE in Indochina and Southern China, standards will be set in every relevant segment of the Khon Kaen MICE industry. Betterment of infrastructure will be implemented to serve regional MICE activities, while local entrepreneurs will be educated to strengthen Khon Kaen MICE City. In addition, roadshows will introduce Khon Kaen MICE City in target countries in Indochina and the GMS. Concurrently, a MICE hotel standard improvement campaign will be initiated to enhance the readiness of MICE service providers and boost the potential of MICE human resources. Initiatives under Phase 2 are to be implemented with the goal to make Khon Kaen at the top of the regional MICE market.

Phase 3 (2016): Emphasis on exploring AEC market This phase aspires to expand the MICE base and accelerate the potential of the province to support the EWEC (East-West Economic Corridor) through the Government policy by establishing it as the hub of regional industrial development.

Khon Kaen is a high potential province suited for advancement as a MICE City. A survey of statistics in meetings, incentives and international exhibitions in Thailand in 2012 by Thailand Convention & Exhibition Bureau (Public Organization) or TCEB, valued the Khon Kaen MICE industry at 343 million baht.

In recognition of the importance of preparing human resources and infrastructure to serve the MICE industry, TCEB has initiated the ‘D-MICE: Meetings in Thailand │ Khon Kaen MICE City’ campaign to prepare local target groups, public and private sector organisations, entrepreneurs, members of the press and general public with necessary knowledge, and to enhance their understanding of the MICE industry.

“In promoting Khon Kaen as a complete MICE City, every party relevant to the MICE industry must possess knowledge and understanding, and join to achieve the mission in comprehensive, unified way. The ‘D-MICE: Meetings in Thailand │ Khon Kaen MICE City’ campaign is a remarkable step on which representatives from all parties will build to acknowledge the policy, as well as express their obligations and readiness to turn policies into actual practice.

“In 2013, TCEB anticipates the growth of the domestic MICE business at 15 per cent, or 4.3 million MICE travellers, which could generate up to 13,706 million baht in revenue,” concluded Mr Nopparat.