Soft Power – the power of creativity to build the Thai economy

Recent pictures of packed mango and sticky rice shops, long queues for meatballs at Buriram Railway Station, or sales increases in grilled pork in the Chokchai 4 area are all evidence of the impact of soft power in action. But the truth is that this phenomenon is not new. Let’s take a look at what this gentle power really is and how it works. How does it affect society? And why is it that it’s such a popular way to promote a country? 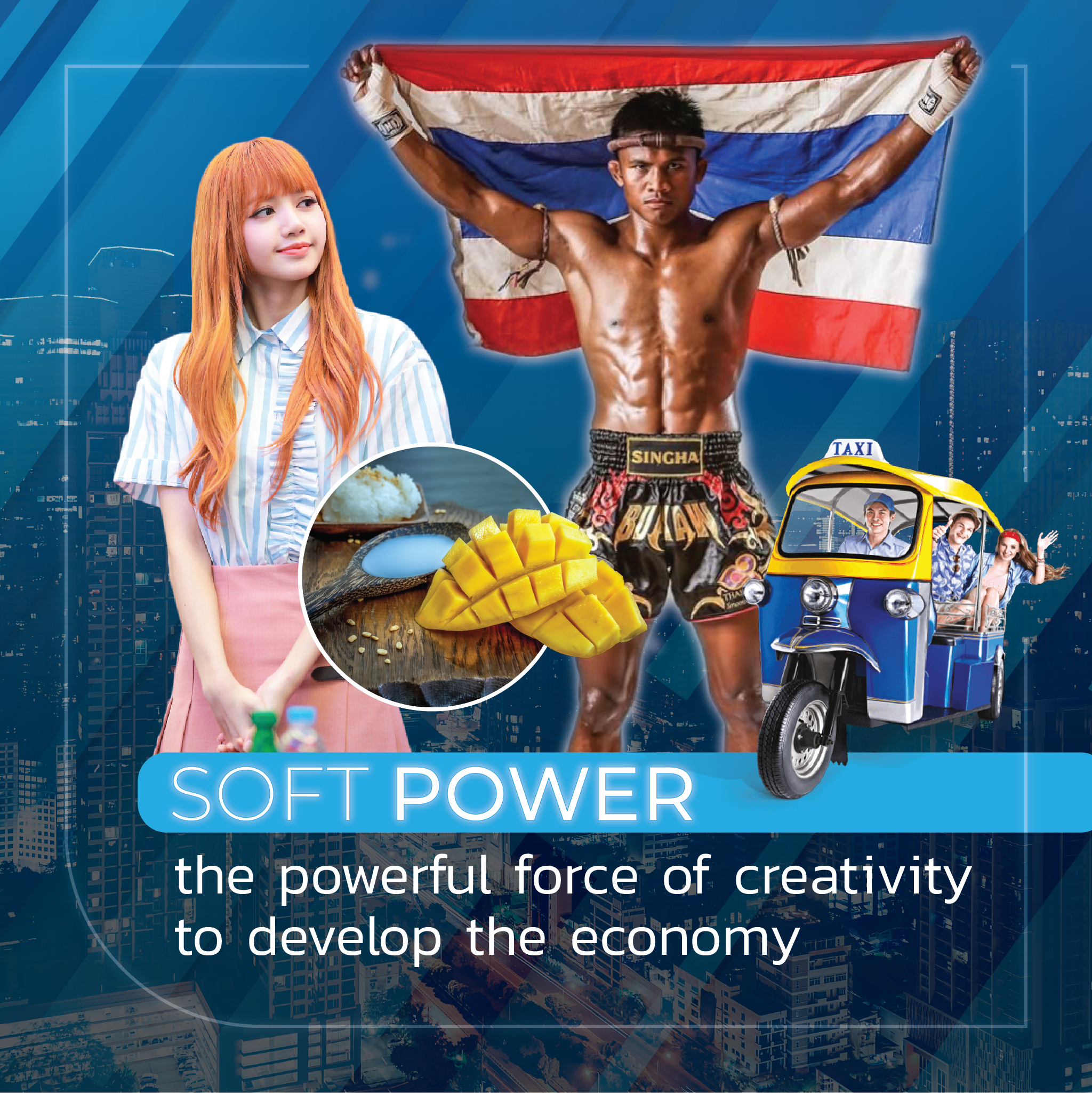 “This second aspect of power-which occurs
when one country gets other countries to want
what it wants-might be called co-optive or
soft power in contrast with the hard or command
power of ordering others to do what it wants.”

A simple explanation is, soft power is the ability to make others ‘want’ and ‘accept’ what you want to. Most importantly it is the ability to attract the desire of others ‘willingly’ without any perceived coercion, as it is human nature to respond more positively and openly to something when one does not feel they are being forced or pressured. This is why soft power is not merely cultural propagation as many people understand it to be. Dr. Thanayot Lohpattananon, film and entertainment academic, described soft power as being like the power of persuasion where culture is just one part of the strategic drive, which corresponds with Dr. Nye’s description.

Adjusting cultural styles to integrate with the interests and values of a target country increases the likelihood that said culture will become part of the soft power of a country. There is nothing adversarial about the process and it’s seen as an opportunity to bring good things to the target country, making them more likely to embrace it. Like the Thai artist Lisa Blackpink who can use her place in the K-Pop industry and global pop culture to export elements of ‘Thainess’ whether that be the language, the ‘wai’, or her back story. Likewise the young rapper Milli Danupha who, by eating mango and sticky rice on stage at the Coachella festival, was able to drive global demand and interest in the Thai dish. By introducing culture in this new way, it is attractive, can be influential, and likely to be admired by people across the globe. 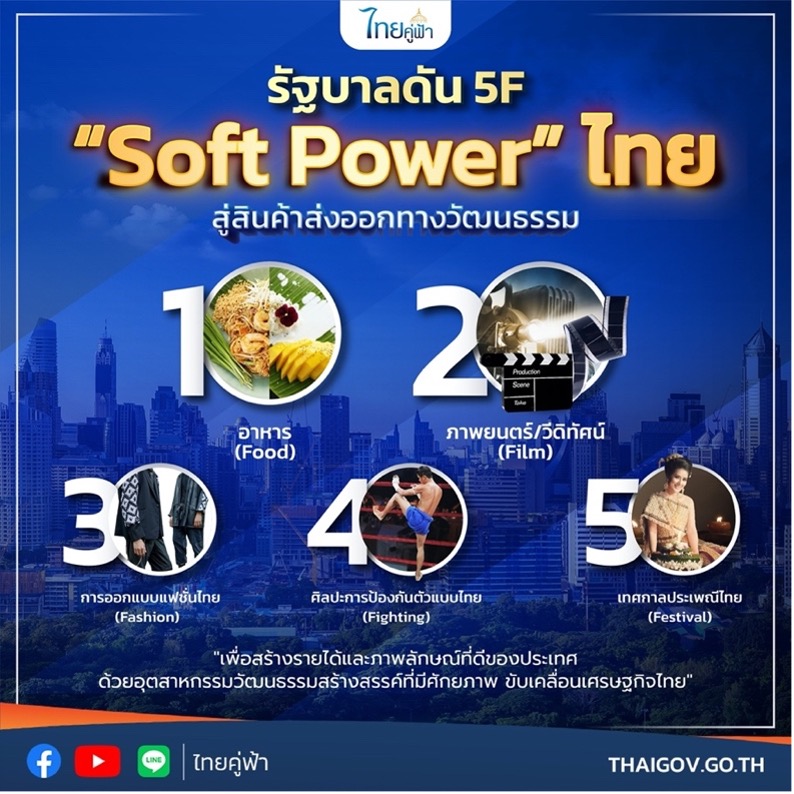 [Looking back and adjusting perspectives]

It is clear that American culture has long been the dominant and most influential across the world, infiltrating almost every nation. The popularity of T-shirts emblazoned with the stars and stripes, famous musical acts, food, movies, and language all have enormous global influence. If we delve into the background to this success, we find two key elements: creating popularity and the power to support it. An outstanding example of this is the entertainment media and the expansion of the power base of American radio and television leading to American movies being able to continuously grow their global popularity. With government support, they were able to not only grow the success of the American entertainment industry, but also afford the opportunity for soft power to take it to the next level. This can be seen in the way that the TV series ‘Friends’ was used by young people around the world to practise and improve their English-language skills, and with it the implicit education about American culture which in turn drives a subconscious desire to, at least once, experience the real thing.

Further, culture is something that can always be sold if we know how to give it value. By encouraging its soft power we can continue to develop and expand its potential as more than just a revenue stream and something that is limited to any one cultural product or element. We need to consider the bigger picture and not allow the power to be limited, rather it must be driven firmly but gently, and not be allowed to antagonize the target.

Indeed, success is not measured by a national identity. Every nation has its own distinctive identity that is too abstract to be challenged. To compete we must be creative and know how to approach in order to adjust perspectives in the desired direction and as a result maintain the soft power for an extended period of time such as has been achieved by the USA.

The effectiveness and influence of soft power is apparent for all to see, and as such, on 19 April 2022 Thai Prime Minister General Prayut Chan-o-cha underlined its importance by enacting policy to support the Thai creative industries infiltrating the global market and recommended that government agencies work more closely with private sector producers, artists, and behind-the-scenes personnel to push the use of soft power to achieve maximum economic benefits.  According to the policy, it aims to promote Thailand’s cultural resources according to the “5 Fs”: food, film, fashion, fighting (Thai martial arts), and Thai traditional festivals.

Thailand currently sits on the Global Soft Power Index 2022 reflecting this first step in the nation’s push for soft power. Its score of 40.2 points is up 1.5 points on the previous year and the nation is ranked 35th on the table of 120 countries. Thailand ranks #2 in ASEAN and #6 in Asia – ranking measured by an index factoring in the economy, business, the government, international relations, effectiveness in dealing with the Covid-19 pandemic, and the infiltration of goods, services, values and concepts of other countries into daily life. 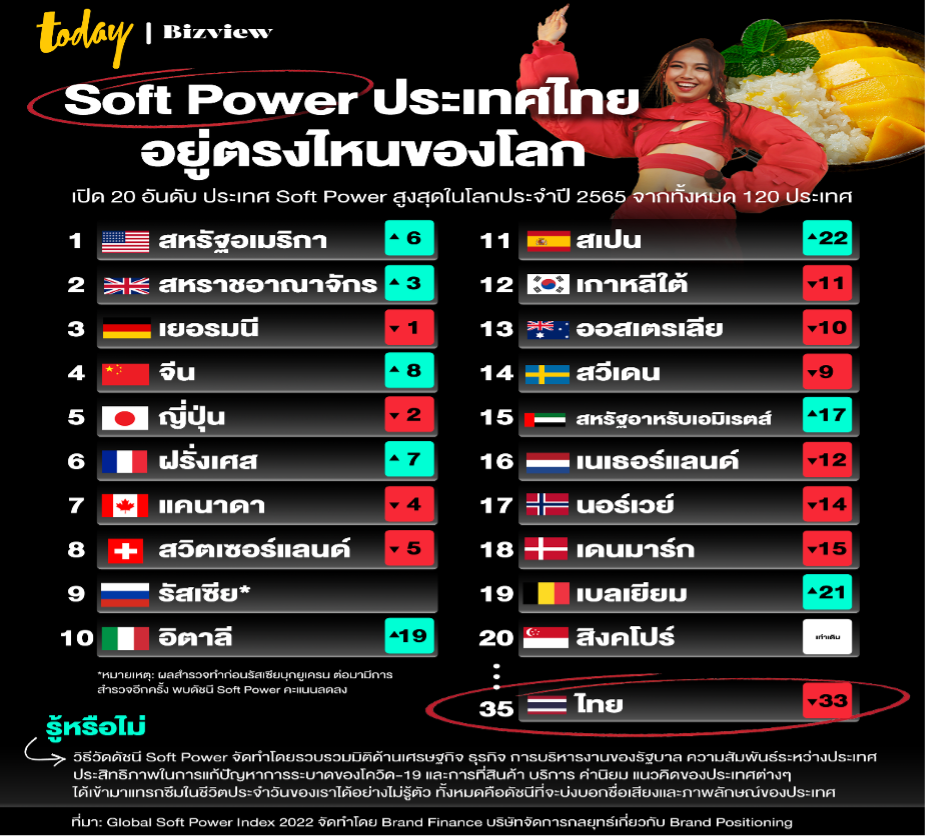 Credit: workpointtoday.com
Soft power has become an important tool in growing economic value, especially during this period of Covid-19 recovery. The Thai policy aims to create a creative economy that is developed from knowledge, intellectual property, expertise, and creativity; linked to culture and society, and technology and innovation for the further development of the production of goods and services.
TCEB’s role, therefore, is to support this policy by creating meetings, seminars and trade shows including both Thai and international events; to be a bridge to allow the expansion and more efficient growth of soft power. A recent example is the Dubai Expo where TCEB is playing a part to support the creative MICE industry by exhibiting a virtual simulator-driven Thai tuk-tuk which is greeting all visitors with the famous Thai smile.
There are many other projects in which TCEB is involved, including APEC 2022, the ICCA Congress 2023, the International Horticultural Expo 2026 in Udon Thani, and Expo 2028 Phuket. The aim is to present Thai cultural technology and innovation in creative ways to lead a strong and continuous economic push. These upcoming conferences and exhibitions underscore Thailand’s potential as a dream destination for travellers from all over the world. What is the future direction for the role of soft power? How far can you expand your potential?  TCEB will continue to update and develop the movement to make all Thais proud.
References:
https://www.salika.co/2022/04/16/5-thai-soft-power-way-to-creative-economy/
https://www.pptvhd36.com/news/สังคม/170540
http://www.navedu.navy.mi.th/stg/tnssc/pdf/84-sp.pdf
https://www.facebook.com/thanayod.lopattananont.5/posts/3291136671109521