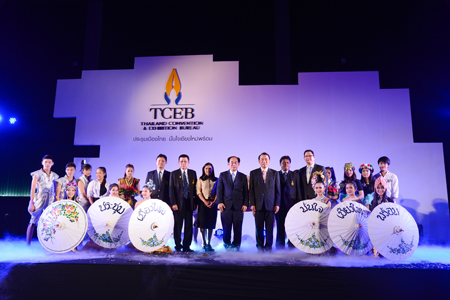 Bangkok / 26 September 2013- Thailand Convention & Exhibition Bureau (Public Organization) or TCEB joins forces with Chiang Mai province in implementing the Phase 2 of “Chiang Mai MICE City” roadmap aiming at promoting regional markets with the cooperation from GMS and BIMSTEC member countries. Together with the plan to promote Chiang Mai MICE industry, ‘D-MICE: Meeting in Thailand in Chiang Mai’ campaign is launched to educate people, enhance good understanding of the benefits of MICE industry, as well as sharpen the skills of public and private sectors. The initiatives also help empower Chiang Mai as the hub of ASEAN’s MICE industry.

Mr Nopparat Maythaveekulchai, president of Thailand Convention & Exhibition Bureau (Public Organization) or TCEB, said that, “Having realised the importance of Chiang Mai as one of Thailand’s MICE Cities, TCEB strongly believes that rapport from every segment of the society is necessary. The Government has announced 2013 as the Year of MICE for Chiang Mai. In January 2013, the province organised the MICE Summit to raise strategic cooperation between Chiang Mai and 7 key partners including Chiang Mai Provincial Administrative Organization, Chiang Mai Chamber of Commerce, Chiang Mai Tourism Business Association, Office of Commercial Affairs Chiang Mai, TAT Chiang Mai, Chiang Mai Creative City (CMCC) and Chiang Mai University representing 8 universities in the North. The collaboration aspired to fulfill the framework to develop Chiang Mai as one of leading convention and exhibition hubs of Thailand and ASEAN in 5 years,”

The Chiang Mai MICE development plan divides into 3 phases which are: Phase One (2013) will concentrate in domestic marketing, strengthening MICE industry, enhancing understanding as well as developing the foundation for Chiang Mai as strategic city for MICE; Second Phase (2014-2015) aims to expand marketing promotion on regional level via the cooperation within the GMS and BIMSTEC cooperation, as well as leveraging rapport between Chiang Mai and other foreign cities; and Phase 3 (2016-2017) targets at elevating Chiang Mai as an international MICE destination.

“TCEB has been working closely with Chiang Mai and alliances in marketing promotions, both domestically and internationally, such as the holding of Agent Familiarization Trip, the support for TEDx conference and the recent cooperation with Royal Initiative Discovery Foundation and 5 domestic airlines in launching ‘D-MICE: A Royal Trail Inspiration’ programme whereby Chiang Mai is included in the destination of Royal Initiative routes well suited for MICE activities. For international markets, Chiang Mai also joined TCEB in key industry roadshows and trade shows, including Asia-Pacific & Meeting Expo 2013 in Melbourne, Australia. In addition, TCEB helps develop MICE knowledge and MICE database as necessary marketing tools and other capabilities improvements focusing at preparation for AEC integration in 2015.”

In 2014, TCEB will continue its corporate approach focusing on three strategies; WIN, PROMOTE and DEVELOP strategies. The WIN strategy: TCEB will work with Chiang Mai in promoting the province in regional market via the framework of Greater Mekong Subregion (GMS) and Bay of Bengal Initiative for Multi-Sectoral Technical and Economic Cooperation (BIMSTEC) as well as the collaboration with Chiang Mai sister cities showcasing highlight industries, under Lanna touch, such as handicraft and craftsmanship, textile, Thai herbs and spa, health and food. Domestic exhibition will focus on dissipation of leading trade fairs to Chiang Mai, such as Motor Expo, Money Expo and Book Fair. Joint operation with local associations in the holding of trade fair and business matching in especially service and lifestyle segments will also emerge, including the participation with the Northern Handicrafts Manufacturers and Exporters Association. Furthermore, joint collaboration with Pinkanakorn Development Agency (Public Organization) is now on progress to promote and win businesses from the GMS and BIMSTEC countries into Chiang Mai.

The PROMOTE strategy will involve the development of database and smartphone application ‘D-MICE@Chiangmai’ in Thai and English. The bureau will serve as the connector in leading public sector and MICE entrepreneurs in Chiang Mai to join distinguished industry related events, such as EIBTM in Barcelona, Spain and the roadshow in Japan. The DEVELOP strategy is now undergoing a feasibility study on the agreement between TCEB, Pinkanakorn Development Agency (Public Organization) and Chiang Mai University for joint development of Chiang Mai MICE intelligence centre, which will house the database of provincial MICE industry and various researches. The province will gain assistance in the compilation of database and training scholarship in order to provide useful information for the good of all relevant parties. Moreover, training and seminar for MICE entrepreneurs and educational institutes will be organised to promote Chiang Mai as the destination for MICE. Through strategically planed model, the economy of Chiang Mai and Thailand can be strengthened as a whole, resulting in the betterment of operation standards of key players, ranging from hotels, restaurants, convention centres and attraction sites. In the long run, the bureau will also encourage commercial and investment activities in a successive manner.

Mr Rittipong Techapan, the Chiang Mai deputy governor, disclosed the overall picture of MICE promotion in Chiang Mai that the province is now working closely with alliances under the framework of “Chiang Mai MICE City” model in pursuance of promoting Chiang Mai as one of leading MICE destinations in Thailand and ASEAN in 5 years.

Regarding the 2013 operation for Chiang Mai MICE industry, the deputy governor Rittipong added that Phase One involves Chiang Mai in the participating and holding of several MICE activities that help to promote the market and lay the knowledge base for the understanding of MICE industry for related parties and general public for which will serve as a key mechanism in empowering MICE industry of Chiang Mai in the future.

In 2013, The Government has announced 2013 as the Year of MICE in Chiang Mai with the ambition to boost MICE industry of the province through activities held both locally and internationally. Also, Chiang Mai witnessed the agreement signing between TCEB and Sapporo Convention Bureau to promote MICE industry in Chiang Mai. In addition, there was the agreement signing between Chiang Mai and Hokkaido prefecture to mutually promote MICE industry of both cities. Expansion of tourism has also been initiated with the Tourism Authority of Thailand. Chiang Mai had hosted certain international conventions, such as The 2nd Asia-Pacific Water Summit and Thailand Rice Convention. Further, seminar for the enhancement of knowledge and public relations activities were also conducted under the Chiang Mai MICE City framework to educate people.

Enhancement of understanding of MICE industry for public and private sectors, local administrative bodies, members of the press and general public who are interested in MICE industry is being implemented through the “Chiang Mai Year of MICE in” campaign which also educates students. This could well help to prepare young people with necessary skills and empower them as liaisons for MICE activities in Chiang Mai.

“The operation under the Phase One for the past 9 months of 2013 has delivered satisfactory results which are obvious as Chiang Mai has frequently been selected as the destination for international conventions. These encouraged every relevant party from both public and private sectors, as well as young people in Chiang Mai to turn to MICE industry more to pave the way for the creation of awareness in regional market.”

The deputy governor further revealed that, “In 2014, the province will constantly increase foreign marketing activities and continue past achievements by focusing mainly on ASEAN, Asia and the Middle East. Meanwhile, development of human resources will be implemented consecutively through the holding of more workshops for every target group, ranging from entrepreneurs, government offices, students to teachers.

Chiang Mai is a high potential city to grow as MICE City for it has a variety of tourism resources . Enriched with uniqueness from natural attractions, history, art and culture, Chiang Mai is widely known worldwide. The province has been praised by international organisations and media. For example, Travel & Leisure ranked Chiang Mai as the world’s 2nd top travel destination in 2010 and the 10th in 2013, while Lonely Planet listed Chiang Mai as the 10th top city in 2011 from readers’ choice.

In terms of facilities for MICE, Chiang Mai houses more than 33,000 hotel rooms. Chiang Mai has Thailand’s third largest international airport after Suvarnabhumi and Don Muang Airports with 401 domestic flights and 76 international flights. The airport currently serves 8 million passengers per year, 30,000 tons of air cargo and 12,377 flights which significantly comprise flights from China and Hong Kong. These two cities are considered important targets for Meeting & Incentive segment for Chiang Mai at the present.

The latest activity that TCEB jointly collaborated with Chiang Mai province is “D-MICE: Meeting in Thailand in Chiang Mai”, from 26-28 September 2013, at The International Convention and Exhibition Centre Commemorating His Majesty’s 7th Cycle Birthday Anniversary (CMICE). The event will feature the exhibition of overall picture of Thai MICE industry, MICE City and various forms of meetings in Thailand.