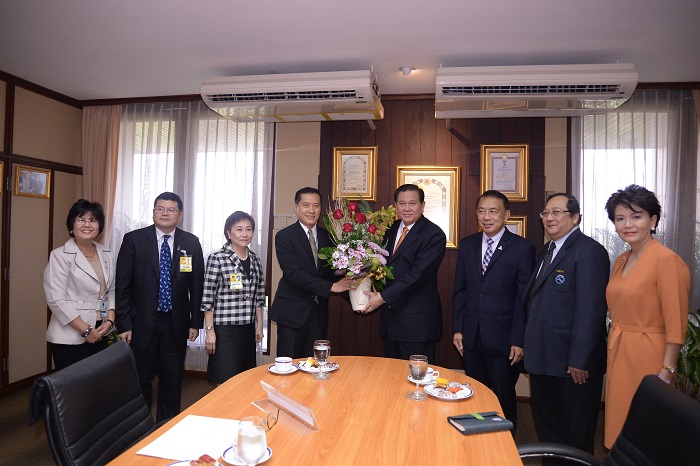 Deputy Prime Minister General Tanasak Patimapragorn delivers policies on the promotion and mobilisation of Thai MICE to new board members of Thailand Convention & Exhibition Bureau. Active from now on, the newly appointed Chairman of the Board of Directors Mr. Weerasak Kowsurat, will lead the operation of TCEB, emphasising the achievement of Thai MICE based on the integrated approach to draw collaboration from domestic and ASEAN’s authorities. Good governance and budget allocation will be conducted considering optimum advantages of the country.

Deputy Prime Minister General Tanasak Patimapragorn, as the supervisor to Thailand Convention & Exhibition Bureau (Public Organization) - the bureau with primary mission to drive the industry of meetings, incentives, conventions and exhibitions or MICE, disclosed that, “MICE is an essential business segment as it tremendously moves national economy forward. MICE has the growth rate of 5-10 percent each year. In the fiscal year 2015, Thailand had welcomed 1,086,229 MICE travellers which increased from the fiscal year 2014 by 18.8 percent with 17.53 percent growth in revenue or equal to 94,966 million baht of revenue earning by Thailand. This could well prove the growth potential of Thai MICE for which the government has fully provided support both in terms of the enhancement of transportation system, the infrastructure necessary for MICE travellers and the integration of collaboration between TCEB and public and private sectors in Thailand and abroad. All of which have enabled us to succeed the mission.”

Operation toward the mobilisation of Thai MICE is set to have more strength and progress as the Cabinet agreed on 20 October 2015 to approve the proposal by Deputy Prime Minister General Tanasak Patimapragorn for the designation of 6 new board members of TCEB, including the Chairman of the Board of Directors and board members, due to the expiration of terms of office.

“New Chairman of the Board of Directors and board members of TCEB are considered professionals with rich experiences in tourism business and MICE. As the supervisor, I have delivered key policies to the new board members focusing on 4 elements. Policy 1 will require the Chairman of the Board of Directors to stipulate the Free Play operation policy and conduct brainstorming between board members in a similar direction. Policy 2 will require the transparency of budget operations with good governance. Allocation of budget for the mobilisation of MICE must be conducted using unambiguous KPIs by which could optimise the country’s advantages. Policy 3 will require the integration of collaboration between public and private sectors, particularly the coordination with ASEAN member countries to form a strong foundation for the entire ASEAN along side with the strength of Thailand in terms of destinations, the readiness of MICE facilities and services. All of which will enable Thailand and ASEAN member countries to serve MICE travellers better to achieve the “Regional MICE” vision. Policy 4 will require relevant authorities to educate people on MICE industry and the role of TCEB in a successive manner in order to create awareness and understanding in the importance of businesses that drive national economy forward.” Deputy Prime Minister added

“There is a strong confidence that the promotion of overall Thai economy in the fiscal year 2016 will concentrate immensely on MICE as it is the business sector that could enhance Thailand’s economic expansion consecutively, as well as strengthen domestic and international confidence. It is expected that the fiscal year 2016 will see the number of MICE travellers increase by 5 percent to 1,060,000 for which could generate 92,000 million baht revenue into Thailand.” concluded Deputy Prime Minister.

Names of TCEB Chairman of the Board of Directors and board members designated by the agreement of the Cabinet comprise:

2.Mr. Thongchai Sridama    Board of Directors