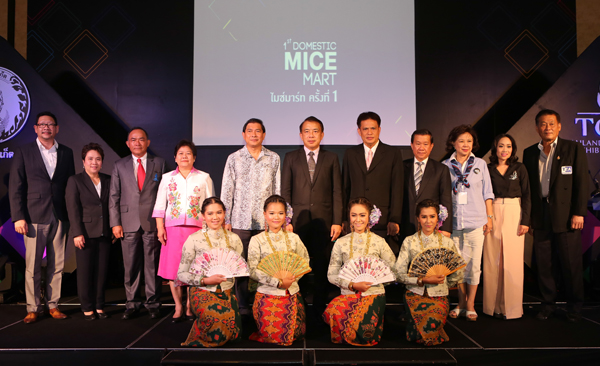 Phuket, 1 August 2014 – The Thailand Convention and Exhibition Bureau (Public Organization) or TCEB is stepping up its MICE promotion plan in Phuket, in line with the new tourism promotion scheme for the Andaman. At the heart of the plan is a ‘cluster destination’ strategy focusing on the luxury incentives market, while also capturing the high-quality meetings and incentives.

The 1st Domestic MICE Mart in Phuket is expected to elevate the province to become ASEAN’s leading MICE City.

Mr Nopparat Maythaveekulchai, president of Thailand Convention & Exhibition Bureau (Public Organization) or TCEB, disclosed that, “In line with TCEB’s bold 2014-2018 Andaman tourism development plan, advancement of MICE in Phuket will be achieved using a three-pillar approach, including the development of infrastructure, the development of tourism and natural conservation, and the development of human resources and marketing promotion capabilities. All three pillars will be underpinned by TCEB’s three key strategies: Win, Promote and Develop.

“In driving Phuket’s MICE market this year, TCEB’s Win and Promote Strategies will see Phuket position as a ‘Luxury Incentives Island’ to penetrate into the meetings, incentives and conventions markets. Sales will be made by a cluster of Andaman destinations which encompass the picturesque locations of Phuket, Krabi, Phang Nga, Ranong and Trang. The strengths of each province will be highlighted to attract high-quality MICE target groups, while close collaboration between numerous bodies will elevate Phuket to become ASEAN’s leading MICE City. TCEB’s operations will be seamlessly integrated with both the tourism promotion development plan and the new branding scheme, which works towards the development of the Eastern Andaman Coastal Community (Phuket, Phang Nga, Krabi, Trang and Ranong) an innovative regional cooperation program for economic development. This cluster is designed to promote Thailand’s southern corridor in preparation for AEC integration, and in order to boost Thailand’s competitive advantages in global tourism and trade,” said Mr Nopparat.

To kick-off the program, TCEB has joined hands with Phuket Rajabhat University in the implementation of the Develop Strategy by establishing a provincial MICE database, developed for the first time in the province. In conjunction with this, a unique ‘Coach the Coaches’ workshop will also be held for the first time in the region in order to boost the capabilities of MICE human resources and promote understanding of MICE at all levels, from youth, to entrepreneurs outside the MICE industry, to MICE entrepreneurs. All groups are poised to benefit from thorough preparation to serve businesses and expansion of the Thai MICE sector after full integration of the AEC next year.

TCEB continues to empower Thailand’s MICE industry through strategic business matching. The bureau is assisting domestic MICE entrepreneurs to directly reach target customers via the 1st Domestic MICE Mart, to be held for the first time in Phuket. The event will encompass 50 sellers, including hotels, convention venues, business event organisers and tour agencies, and 60 buyers from the public and private sectors, as well as associations. The event will also showcase Thailand’s top five MICE Cities, including Bangkok, Chiang Mai, Pattaya, Khon Kaen and Phuket, as well as MICE seminars for the general public. The 1st Domestic MICE Mart is expected to bring more than 37.5 million baht of revenue into Phuket, attracting 6,000 MICE travellers.

In 2013, Phuket welcomed around 1.2 million MICE travellers, generating 1,033.20 million baht in revenue. This outstanding performance was achieved by hosting numerous renowned events, including the Sun Hope conference with 1,400 attendees from China, and PIMEX (The Phuket International Boat Show) with 4,000 delegates. The momentum continued in 2014, with Phuket winning many large-scale events, such as Castrol Rio at Asia FIFA 2014 (BP Castrol) with 1,050 international attendees and The 29th International Technical Conference on Circuits/Systems Computers and Communications (ITC-CSCC) 2014 with 600 joiners. Overall, TCEB foresees 2 per cent growth of the domestic MICE market in 2014. The number of MICE travellers is estimated to reach 4,502,406, while revenue will increase 4 per cent to 13,291 million baht.

“As the Pearl of the Andaman, Phuket stands ready to serve a burgeoning MICE industry. Many government infrastructure investment projects are set to emerge, including the construction of an international convention centre; the improvement of a large commercial pier at Makham Bay; and an upgraded ‘Smart Airport’ initiative via an enhanced management structure at Phuket Airport. Further improving infrastructure to serve the tourist market and MICE events in the Andaman region will help to boost MICE sales in Phuket and other provinces, united under one comprehensive ‘cluster destination’ package. This will ultimately elevate Phuket to its rightful place as ASEAN’s leading MICE City,” concluded Mr Nopparat.