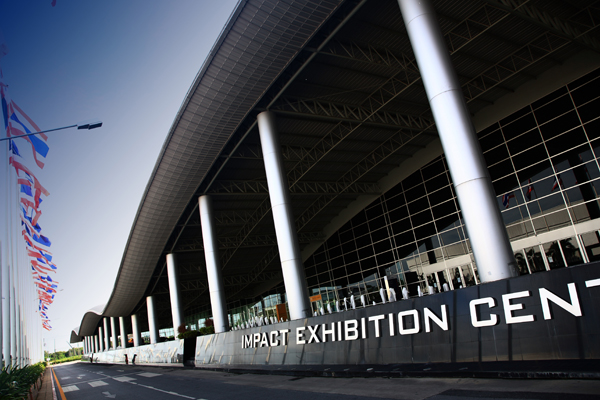 In 2012 IMPACT already showed an increase in the number of international events but in 2013 it has seen unprecedented growth through international MICE events held at IMPACT gaining 100 million baht of the company’s total revenue in this sector.  By far the largest event held at IMPACT this year was THAIFEX - World of Food Asia 2013 which attracted some 50,000 delegates and visitors. In total we hosted 35 international events this year for over a thousand participants at each. Major events included AIDF Asia-Pacific 2013, LED Expo Thailand 2013, ASEAN (Bangkok) China Import-Export Commodities Fair 2013, RechargExpo Thailand 2013, POWER-GEN Asia 2013 & Renewable Energy World Asia, ITU Telecom World 2013, Thailand Engineering Expo 2013, 7th Cheerleading World Championships, and many more.

In October 2013, IMPACT hosted the Herbalife Active World Team University 2013, which attracted some 15,000 delegates and next year in October 2014 the Unicity Global Convention 2014 will be held attracting some 40,000 participants.

Mr. Loy Joon How said “Growth in other areas has also been impressive. The trade exhibition segment this year grew by a remarkable 57% and has generated revenue of more than 50 million baht. The Meeting and seminar segment grew by 20 percent, which was equal to 4 million baht in revenue, and the convention segment by 17 percent, accounting for some to 39 million baht. Other segments grew by 6% and totaled some 11 million baht. “

“We are confident that international events will  increase even  more  due to the uniqueness of our venue and our unique selling point to deliver to our customers “one-stop and total solutions”, with an array of professional and valued added services ranging from floor space consultations, event management, operations, in-house F&B catering, travel and logistic to sales and marketing.” Mr. Loy said

And to confirm IMPACTS confidence  Mr. Loy concluded that new international events are already being attracted. Two such events, one in September 2014 and the other in June 2015 Pulire Asia Pacific 2014 and World RoboCup 2015 by Thai Robotics Society to IMPACT have already confirmed.

The Asian market continues to contribute the largest number of MICE delegates, exhibitors and travelers, while European MICE travelers have begun to.